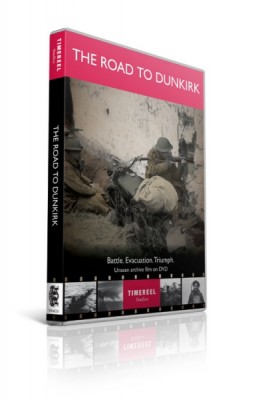 Subtitled ‘Battle. Evacuation. Triumph.’, the Road to Dunkirk tells the story of the Battle of France and the subsequent evacuation, through the voices of the men who were there.

Andrew Gray, the Director and Producer of The Road to Dunkirk said: “We wanted to show the story of Dunkirk by drawing on the experiences of the men who were there. We trawled through the sound archives of the Imperial War Museum, and came up with some great stories.”

Timereel makes a point of sourcing rare and unseen archive film – and this was also key in the decision to make the production. “Too often, documentaries on Dunkirk feature the same old clips of film” said Andrew Gray, “and we really wanted to dig out the gems. We have colour film, including amateur footage shot by the Germans of the beach after the British had left. My personal favourite is an interview with soldiers who arrived back. They speak to the cameras with humour and dignity, but their faces tell you everything; they look drained.”

Despite the serious subject matter, many of the individual stories featured in the production are humorous, like the Captain stationed with the Royal Norfolk Regiment who was instructed not to shoot at a lone German soldier “in case they shoot back”.

Other stories are more harrowing, including the SS massacre of British prisoners and the sinking of the “Lancastria”, a disaster far greater than the “Titanic”.

The Road to Dunkirk will be screened at 8.30pm on Thursday 8th December at Cinema City, Norwich. For ticket bookings call 0871 902 5724; or visit www.picturehouses.co.uk.

‘The Road to Dunkirk’ will be available to buy on DVD from 8th November at www.timereel.co.uk

Timereel is a film production company based in Norwich. Using original archive footage, much of it that has never been seen before, Timereel creates unique and evocative films showing how the lives of ordinary people were affected by extraordinary events.

City Screen is the owner and operator of Picturehouse Cinemas, Britain’s largest circuit of independent cinemas. Formed in 1989 to challenge the multiplex model, City Screen provides cinemas in city centre locations to serve local communities and offer a diverse choice of films and events. City Screen runs 19 cinemas and programmes a further 30 independently operated venues, drawing on over 18 years’ experience in tailoring diverse and commercially successful content spanning arthouse, independent, classic, world and Hollywood cinema. City Screen prides itself on being at the forefront of digital cinema and other business and technological developments. These have included live cinecasts of filmmaker Q&As, comedy, music, and productions from the New York Metropolitan Opera, Royal Opera House and the National Theatre, broadcast to audiences throughout the UK.